Did You Know? (click on each to learn more!)

-Ballet developed as an artistic interpretation of fencing

​-The tip of the blade is the second-fastest moving object in Olympic sports, second only to the marksman's bullet 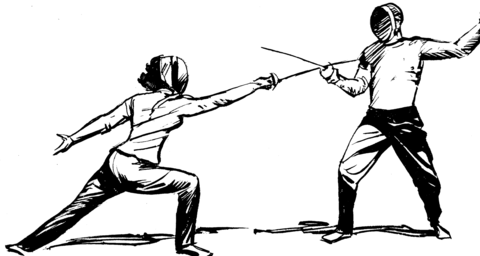 incorporated into the first Olympic Games in 1896, and has been one of the few sports to have been present at every iteration since. Sport fencing is rapidly growing in popularity, especially in the United States, where American fencing is currently experiencing a bit of a renaissance with athletes finding great success on the international scale. American athletes such as Gerek Meinhardt, Alex Massialas, Race Imboden, Miles Chamley-Watson, Daryl Homer, Lee Kiefer, and Mariel Zagunis have led a surge of American success and are bolstering the reputation of America in the international fencing community, just as they do for the reputation of fencing in America. ​

​Fencing has played an active role in human history for as long as the desire to best one another in combat has. As swords dominated battle, it became popular to study various forms and practices in order to provide oneself with the best possibility of winning. Fencing continued to develop, among both the lower classes and the aristocracy. It was studied for theatrical purposes, as a martial art, and of course, for dueling. Even after swordsmanship died out as the primary way that armies would confront each other, individuals would still engage in duels to defend their honor or best their peers. As dueling became less common, only fencing for the sake of competition remained. Fencing was